“I need to tell you a story that happened just after I read your post today. There is a park across the street from my apartment and for the past couple of years I’ve been watching people of all ages come and go to walk their dogs or run races or play games and generally do their exercising. Today a lady my age… very late 60’s… was out with her dog, and a young man, I’d say in his mid-twenties, approached her and bowed to her and obviously asked if he could throw the ball she had for her dog. He threw the ball a few times and every time the dog brought the ball back to the lady, and she gave it to the young man to throw. Before long, it was obvious that the elder lady and the younger man and the dog were so in synch, it was natural. They walked together to the end of the park and the lady and the young man hugged each other… and I feel sure they have never met before… while the dog bounced along all rather pleased with the situation. And I burst into tears and cried and cried because it’s been so long since I’ve seen and felt such honoring from a young man to an elderly lady. Darn, I’m gonna cry again! And if this is the NEW, I’ll take it. Such relief, release, and it could be that I needed to see this encounter personally so that I could breathe again without having to blow my nose! Much love, thank you, Barbara L.”

This is a Comment written by Barbara L. on January 21, 2019. Her story and how it impacted her, and then those of us who read it here, was so important I felt it needed to be highlighted in its own article. Thank You Barbara for sharing what you witnessed and felt from it with us. ❤

And this is a Comment by Raymond B. to Barbara L. about how it affected him. Thank You Raymond B. for it. ❤

“Barbara, thank you for sharing this moving experience…and to Denise, Hope and yourself for the heartfelt follow-up comments. As a 66-year-old male going through the AP/EP journey and reading this, I feel moved to write this and make amends (if at all possible) for any inconsiderateness and dishonoring I may have ever displayed – now or in the past – in my relationships with any woman, younger or older, throughout my life. There may be no greater detractor to deep relating than the feelings of “irrelevance to the world” that often arise in older adults of both sexes as they engage with younger generations, and in our society generally in its quest for “youthful beauty,” anything/everything new and its tendency to discard the heartwisdom gained through maturity versus “factual” accumulation. Stories like this, along with other factors surrounding them, inspire me to continue investigating my own relationships with women contemporaries, and to examine where I still may behave dishonoringly or dismissively in any way. I wish I had been that young man who bowed to the older lady and hugged each other upon parting. I will certainly be carrying with me the warm feelings that this image has generated for me. Raymond B.” 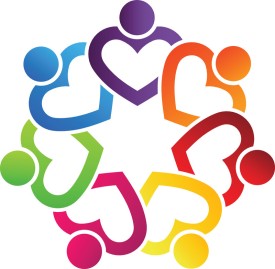 One year ago to the day these Comments were written and shared here. I’d started this article around them last year and then forgot about it. I found it today, one year later to the day and knew I had to finish it today.

Just reading these Comments makes me tear up and my HighHeart expand in joy. This is the beginning of HighHeart, of HighHeart consciousness, of HighHeartLife, and to witness it in another person, especially a male person after all that has been is beyond wonderful.

Last week I saw a TV news story about some people in the Los Angles California area who were doing what they could to make more comfortable the pigs going to slaughter in those large animal transport trucks. The pigs (and cattle) travel for many hours in these large trucks going to slaughter and have no water or food the entire time. Because of this, when the trucks would stop, these people were waiting for them, ready with multiple handheld pump sprayers filled with water — and lots of love and gratitude for the pigs.

Seeing these twenty or so people standing there with pump sprayers filled with water for the pigs and spraying it right into their open mouths was amazing. It was a true “rest stop” moment for the pigs while the trucks were stopped. Once the drivers were back in their trucks and leaving, some of these people who’d sprayed water into the pigs mouths through the holes in the trucks were telling them, out loud in front of a news TV crew filming it all, that they ‘loved them and were grateful for them.’ And that is when I started crying. Not because the pigs were going to be slaughtered, but because people, male and female people were conscious of the fact that the pigs needed water, some kindness and loving appreciation on their way to becoming food for humans.

One thing that always gets me is witnessing an unconscious person or people becoming increasingly conscious of the many things that have always been considered normal in the old lower world we all were born into. Humans have been unaware of most everything, so to see more people becoming increasingly conscious and aware of the suffering of other people, animals and all lifeforms in general—and everything else—is a very big deal. It isn’t about people watering pigs in trucks going to slaughter, nor is it about people protesting animals going to slaughter, it’s about people becoming more and more conscious which means their HighHearts are being activated and starting to be their primary lens on reality, life and all else. It does a heart good to be used in very high ways.

The reasons why I named this site HighHeartLife in 2013 are going to become increasingly clear now we’ve entered 2020 and Phase 2 of the Ascension Process. HighHeart and everyone living a HighHeartLife is what naturally happens when each individual has integrated and re-unified what had been intentionally separated. They ascend into their HighHearts and matching consciousness and start creating NEW higher ways to live their HighHeartLives on NEW Earth.

Donations can be made here and thank you for the energy exchange donation support.

Copyright © Denise Le Fay & HighHeartLife, 2020. All rights reserved. You may share this article so long as you don’t alter it in any way, the content remains complete, credit is given to the author(s) and this URL https://highheartlife.com and Copyright Notice is included.

53 thoughts on “HighHeartLife on NEW Earth”