Because of what just happened to my original November 12, 2021 article and only the first few paragraphs of it being published and 85% of it disappeared, I’m going to try to cover the main aspects of it in this hurried REDO article. Ya know what pisses me off the most about all this? That I worked for two weeks on that article during all those solar flares and CME energies with body and head solar plasma aches, pains and pressures and all for not.

So where was I? Oh yeah, the ascension CHANGEOVER. I’ve been using that term to convey that we’ve been in a CHANGEOVER process of “shifting” from, of elevating away from, of moving from those many transitional bridge years where the Volunteers, Starseeds, First Everythingers, Embodiers, Lightworkers, Pathpavers had one foot in two different Earth worlds for over two decades now. One foot in the old lower patriarchal one that’s been disintegrating faster and faster, and the other foot in the transitional bridge ascending Earth. It was miserable, frustrating, uncomfortable, stressful and disappointing to be seemingly stuck in that in-between, ascension fence straddling position and life for so many years. But, all that ascension fence straddling is rapidly coming to an end because we’re about to enter January 2022.

In January 2020 when the one and only epic Saturn Pluto conjunction in Capricorn did all it did in mere seconds, I perceived then that in January 2022, the NEW Divine Mother Feminine template for ascending NEW Earth and NEW Humans would be physically manifest and we would enter it at that time. (This is the information that was vanished from my original November 12, 2021 article.)

This CHANGEOVER from the transitional ascension bridge years the Volunteers have lived their lives in for so long, is coming to an end in only weeks now. When every Volunteer and every human currently capable of physically entering this greatly elevated, higher frequency, faster vibrating, more complex, more intense NEW Divine Mother Feminine template that is the template of and for ascending NEW Earth for NEW Humans, they will be existing entirely on ascending NEW Earth starting January 2022. Some will be conscious of this but most won’t. Many people with heart that are already a close enough internal energy match with this external NEW template will be living on, in it and won’t even know they’ve evolved, ascended up to it.

Here’s the cosmic law and rule, the general safeguard about this. Each individual HAS to have just enough same higher frequency in them internally (what some have called ‘Light quotient’ ) so they not only are a vibrational match with external ascending NEW Earth, but that their entrance into it doesn’t harm or kill them, their bodies, their CNS — central nervous systems — which is why the Rewiring Process was mandatory over the past 20+ years for humans and Earth. We’ve been in a continual state of preparation throughout Phase 1 of the Ascension Process for our full elevation ascension up to ascending NEW Earth which manifests fully in January 2022. It’s all been prep Work to get to where we are today and our entrance into ascending NEW Earth with its Divine Mother Feminine template come January 2022.

It’s because we’re about to enter this higher, faster, more complex NEW template that is the template of ascending NEW Earth for NEW Humans that all of 2021 has been so rough and physically painful. The energies that have come in all year have been extra intense and higher frequency themselves to help further elevate us so that we’re capable of entering the January 2022 NEW Earth template.

In December 2018 I started clairvoyantly Seeing some of the NEW crystalline Triality-based codes that are for ascending NEW Earth, NEW Humans and are part of the 2022 Divine Mother Feminine template. I wrote about Seeing them in 2018 and 2019 and included photos/images that were as close to what I was Seeing as I could find. The first of these December 2018 crystalline Triality codes looked much like this at that time.

In December 2019 I started clairvoyantly Seeing the NEW Triality-based Radiant Diamond codes that are also part of ascending NEW Earth’s  Divine Mother Feminine template. They are larger, more complex containers for the crystalline codes. They looked like this to me in 2019.

You can clearly see that the crystalline codes and Radiant Diamond codes have been and continue to be added to which is making them appear more color saturated, more rich, more intense, and increasingly more complex. When I first noticed that these NEW codes were changing, were being added to, were themselves embodying more higher frequency Light energies into themselves I realized that this too is an ongoing process of steadily increasing the frequencies and vibrations within the very NEW codes themselves. We assume that when something totally NEW and higher first manifests that that’s it, that’s what it is and how it’s always going to be when I’ve been Seeing for myself that that’s not the case at all. These NEW Triality-based crystalline and Diamond codes are, just like us, embodying higher and more of these NEW energies until they too, like each of us, reach full Light frequency capacity. Stairsteps, always stairsteps with all aspects of the Ascension Process.

In 2020, the NEW Triality crystalline and Diamond codes looked like this to me.

Then around mid October 2021 I Saw them energetically increase again and become even more complex, intense and potent. Currently they look more like this at the moment but I know they’ll continue being added to, “upgraded”, and become higher frequency, higher vibrating. Since October 2021 they now look like this. 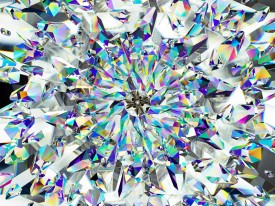 We’ve learned that the NEW codes do NOT first manifest fully loaded so to speak! They first manifest for us to also embody with beginner levels of NEW Light in them and over time, like everything else with the Ascension Process, they are added to, they embody more, higher, faster, more complex layers upon layers upon layer to them which naturally changes and further elevates their appearance and of course their energies and abilities.

Now I want you to know that the 2022 NEW Divine Mother Feminine template for ascending NEW Earth and NEW Humans will do this same thing. It too will be incrementally added to, enlarged, made more complex, made more higher frequency, made more high vibrating and so on. That will start in 2022 and we all need to be aware of this and prepared for it.

These increases to the Triality-based crystalline and Diamond codes since they first arrived, and especially all year this year is why many of us have both felt better and felt worse. Many of the older solar and cosmic evolutionary energies we’ve completely embodied, acclimated to and have become comfortable with inside of our bodies, CNS, consciousness etc. However, all of 2021 these rapid and rather large upgrades and additional energies the NEW codes have embodied are to quickly push us, elevate us energetically up to a high enough level and rate that when we enter the Divine Mother Feminine NEW template in January 2022, we can cope with that because we’ve become a close enough energy match with it. So, this is the main reason why we’ve felt just pummeled and laid out flat by all the incoming energies this year. It’s because we’re about to CHANGEOVER into the NEW template.

When we’ve embodied more and much higher and faster NEW Light energies, codes and templates, when we’ve reached that much higher still level, then we’ll be in fully ascended NEW Earth, NEW Humans. Until then however we’ll be within this totally NEW situation, condition and location of our continued ascending on NEW Earth for the NEW Humans.

There’s more as usual but after what just happened with my original article about this information, I’m hitting the publish button immediately! Take that interference! I hope it helps answer some questions, confusions and maybe even some concerns about why 2021 has been so much more energy painful to embody than what we’re used to. We’re being pushed hard and fast to get enough elevation to be able to walk directly into the January 2022 (and rest of that year and beyond) NEW Divine Mother Feminine template with its ever increasing NEW crystalline and Radiant Diamond codes, and who knows what else.

Please support my work and donate — thank you.

Copyright © Denise Le Fay & HighHeartLife, 2021. All rights reserved. Use or duplication of this or other of my articles, posts and materials is strictly prohibited.